Essay topic: Name a person who has mentored you or otherwise encouraged and supported you in your journey to become a registered veterinary technician; give specific examples. 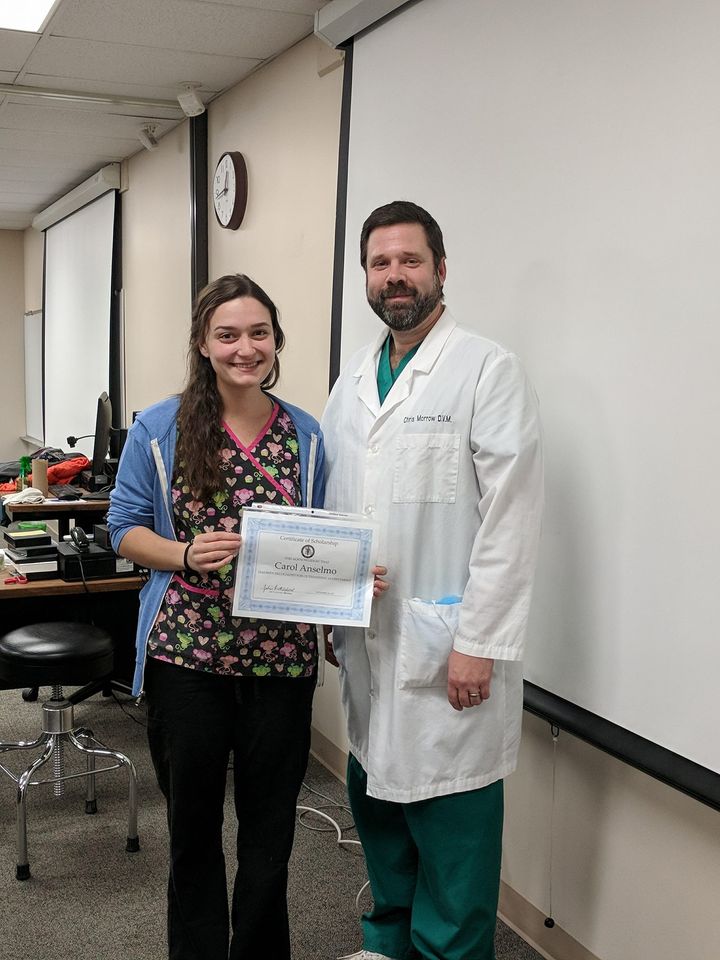 "My interest in the field of veterinary technology started when I was a senior in high school. During the 2008-09 school year, I completed an internship at Eagle Animal Hospital in Riverside, MO. While I was there, I learned an extraordinary amount from Dr. Scott Read. I was so inspired by his work ethic, caring nature, and passion for helping animals that I obtained a job working in the kennels during breaks while I attended the University of Missouri - Columbia. In January of 2016, I was promoted to veterinary assistant, where I was able to work directly with Dr. Read. I have learned a great deal from him over the past seven years, and he has been nothing but supportive of my decision to pursue my degree in veterinary technology.

I have worked with people who get easily frustrated with fractious animals, and who seem to only come to work to get a paycheck and leave. Dr. Read is not one of these people. He makes each animal and client that he sees feel like they are the most important patient he is seeing that day, even when he is very busy, and he does it with a smile on his face. He gets right down on the floor and lets the dogs sit in his lap as he talks to the owners. He understands that the vet can be a frightening place for animals, and he does his best to make them feel comfortable while they are there. He doesn’t see them as commodities, but as living creatures that bring so much joy to their owners. He exemplifies everything that I hope to be when it comes to animal care.

Dr. Read is exceptionally hardworking. Most days, he stays long after everyone else has left to make sure that he returns every message that has been left for him. He has come in on his day off on multiple occasions to help an animal in need. In August of 2010, I received a call from a friend that they had found a very sick puppy. I went over to find a young chocolate lab mix who was very thin and covered in her own feces. I contacted Dr. Read to ask him what I should do. It was a Sunday, so our clinic was closed. Instead of telling me to take her to an emergency center, he told me to meet him at Eagle Animal Hospital. We ran a parvo test, which turned out to be positive. We immediately began treatment, and that puppy is now a happy, healthy dog with a loving home with some dear friends of mine. Dr. Read could have brushed that puppy off as not his problem, but his dedication to his job wouldn’t let him.

Another example of Dr. Read’s compassionate heart is when a pair of clients brought their dog in to be euthanized due to a severe skin infection that she had all over her body. She had almost no hair, was covered in scabs, had extremely oily skin, and she smelled. Luckily, Dr. Read saw past this to the sweet dog she was and decided to help her. He got the owners to agree to surrender the dog to him, and he began the long process of treating her skin at his own expense. Within a few days of treatment, she began to feel better. After less than a month, the scabs began to heal and her hair began to grow back. This story is especially important to me because I adopted her. She has been my best friend for the past two years, and I have Dr. Read to thank for that.

Dr. Read has supported my decision to become a registered veterinary technician from the very beginning. He wrote an excellent letter of recommendation for me to the Maple Woods Veterinary Technology Program, and I give him a lot of the credit for getting accepted. He is always teaching me new things and challenging me to learn. He has taught me what it truly means to care about animals, and I strive to be more like him every day. We need more veterinarians like him in the world."